In each issue, one of NANN’s special interest groups will share information in their area of focus.

Group B streptococcal (GBS) is the most common bacterial cause of early-onset sepsis (EOS) in neonatal population. Because of a universal antenatal culture-based management and administration of intrapartum antibiotic prophylaxis (IAP) approach initiated in 1996, the national incidence of GBS early-onset sepsis decreased from 1.8 cases per 1,000 live births in 1990 to 0.23 cases per 1,000 live births in 2015 (Puopolo, 2019, July 8). However, antibiotics are still the most commonly prescribed medications in the neonatal population. Many asymptomatic newborns either remain in newborn nurseries or are admitted to neonatal intensive care units (NICUs) for empirical antibiotic treatment in the first few days of life. Antibiotics are initiated empirically at ≤ 72 hours of age, and infants receive at least 48 hours of antibiotics while waiting for the results of blood cultures (Dhudasia, Mukhopadhyay & Puopolo, 2018; Polin 2012; Tappero, 2004). Evidence has shown that early antibiotic exposure is associated with asthma, allergic reaction, autoimmune disease, and obesity later in childhood.

In order to improve the appropriate use of antibiotics and to decrease antibiotic resistance rates, the Centers for Disease Control and Prevention (CDC) revised the algorithm and guideline for secondary prevention of early-onset GBS disease among newborns in 2010 (Figure 2; Mukhopadhyay, Dukhovny, Mao, Eichenwald & Puopolo, 2014). However, the evaluation algorithm recommended by the CDC does not specify a severity or duration of clinical signs of illness for EOS evaluation. In addition, the algorithm does not provide any recommendations on how to interpret laboratory test results.

Currently, there are three most used approaches to assess infants born at ≥ 35 weeks’ gestation with risk factors: categorical risk assessment, multivariate risk assessment (the neonatal EOS calculator), and risk assessment based on newborn clinical presentation (Puopolo, Lynfield & Cummings, 2019). With categorical risk assessment approach, the risk can be highly variable among the newborn infants and result in many relatively low-risk infants receiving empirical antibiotic treatment (Puopolo, Lynfield, & Cummings, 2019). It is recommended that a clear and structured guidance should be developed for facilitating additional evaluation and guiding empirical antibiotic use when using a newborn’s clinical presentation as risk assessment approach (Puopolo etal, 2019).

In 2014, the CDC developed and introduced the hospital-based antibiotic stewardship programs (ASPs) to promote appropriate antibiotic use. Additionally, the Kaiser Permanente division of research had introduced the Neonatal EOS Calculator in 2011 and revised it in 2014 to estimate the individual probability of neonatal early-onset infection based on maternal risk factors at birth and the infant's clinical presentation (Escobar, et. al, 2014). Escobar, et al (2014) conducted a retrospective case-control study between 1993 and 2007 (N=608,014) to develop and define a classification algorithm for the risk of EOS in infants ≥ 34 weeks gestational age (GA), which provided a method for predicting risk of EOS. The authors categorized the clinical presentations into three groups: clinical illness, equivocal, and well appearing (Figure 3). The EOS sepsis calculator provides clinicians a predicting method with the individual probability for EOS, incorporate both EOS risk at birth and clinical presentation with a clinical recommendation, treat empirically, observe and evaluate, or continue to observe (Figure 4).

The EOS calculator, a web-based sepsis risk calculator (SRC) including multivariate predictive models, has demonstrated the potential to reduce antibiotic exposure in well-appearing infants born to mothers with isolated fever and no other signs to suggest clinical chorioamnionitis (Figure 1). The predictors include the incidence of EOS, gestational age, the highest maternal antepartum temperature (up to one hour after delivery), the length of rupture of membrane (ROM), maternal GBS status, the type and administration time of intrapartum antibiotic prior to delivery (Figure 5). The EOS risk score then incorporates with the infant’s clinical presentation to determine the immediate and appropriate management plan at birth (Figure 6). If a well-appearing infant’s clinical presentation changes at any point within the first 24 hours of life, the management plan should be changed accordingly based on the EOS score and recommendation.

Evidence suggests that implementation of the neonatal EOS calculator dramatically reduces the number of infants prescribed antibiotic prophylaxis, safely reducing antibiotic exposure (Higgins etal, 2016; Kuzniewicz etal, 2017; Mukhopadhyay & Puopolo, 2012; Mukhopadhyay, Eichenwald, & Puopolo, 2013; Warren, Garcia, & Hankins, 2017). Many centers have implemented the EOS calculator and successfully showed significant outcomes in the past few years. Dhudasia, et al. (2018) reported decreased number of laboratory tests and antibiotic use in asymptomatic infants who were screened for suspected sepsis after implementing the EOS calculator during two 15-month periods in 2014 and 2015 at a large, academic, birth hospital. Similarly, Leonardi, Binder, Griswold, Yalcinkaya and Walsh (2019) found that the reduction rates in admission at birth decreased from 100% to 27% after utilizing the EOS calculator between June 2015 and June 2016 (N=312). Because of the EOS calculator implementation, the number of painful procedures diminished. It increased the parental bonding and the breastfeeding rate improved from 37% to 89% at the time of discharge. It also decreased the financial burden due to a short length of hospital stay.

Managing EOS of the newborn remains its clinical challenging dilemma due to the relatively low incident rate but high mortality, and lack of highly specific biomarkers. In June 2019, a revised Prevention of Group B streptococcal Early-Onset Disease in Newborns was published by American College of Obstetricians and Gynecologists (ACOG). The American Academy of Pediatrics (AAP) also published a new clinical report, Management of Infants at Risk for Group B Streptococcal Disease in July 2019 to replace the 2010 CDC guideline (CDC, 2019).

Incorporating the neonatal EOS calculator may dramatically reduce the number of empiric antibiotic treatment in infants with risk factors but well appearing, promote antibiotic stewardship, decrease the need for IV access, unnecessary laboratory monitoring and risk of adverse drug events. It is critical that the calculator recommendations are guidelines only and should be combined with practitioners’ clinical judgment. All patients should be examined carefully to evaluate for focal source of infection, and management should be modified accordingly. 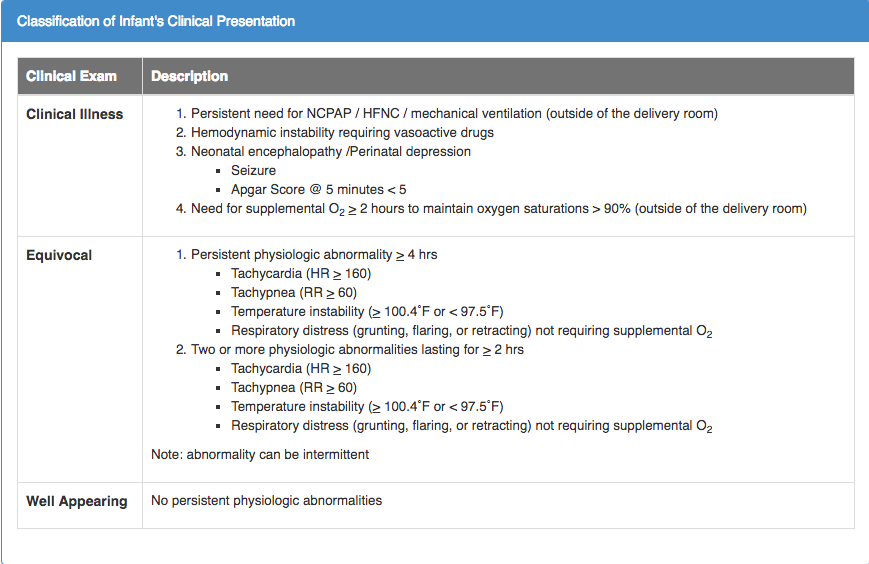 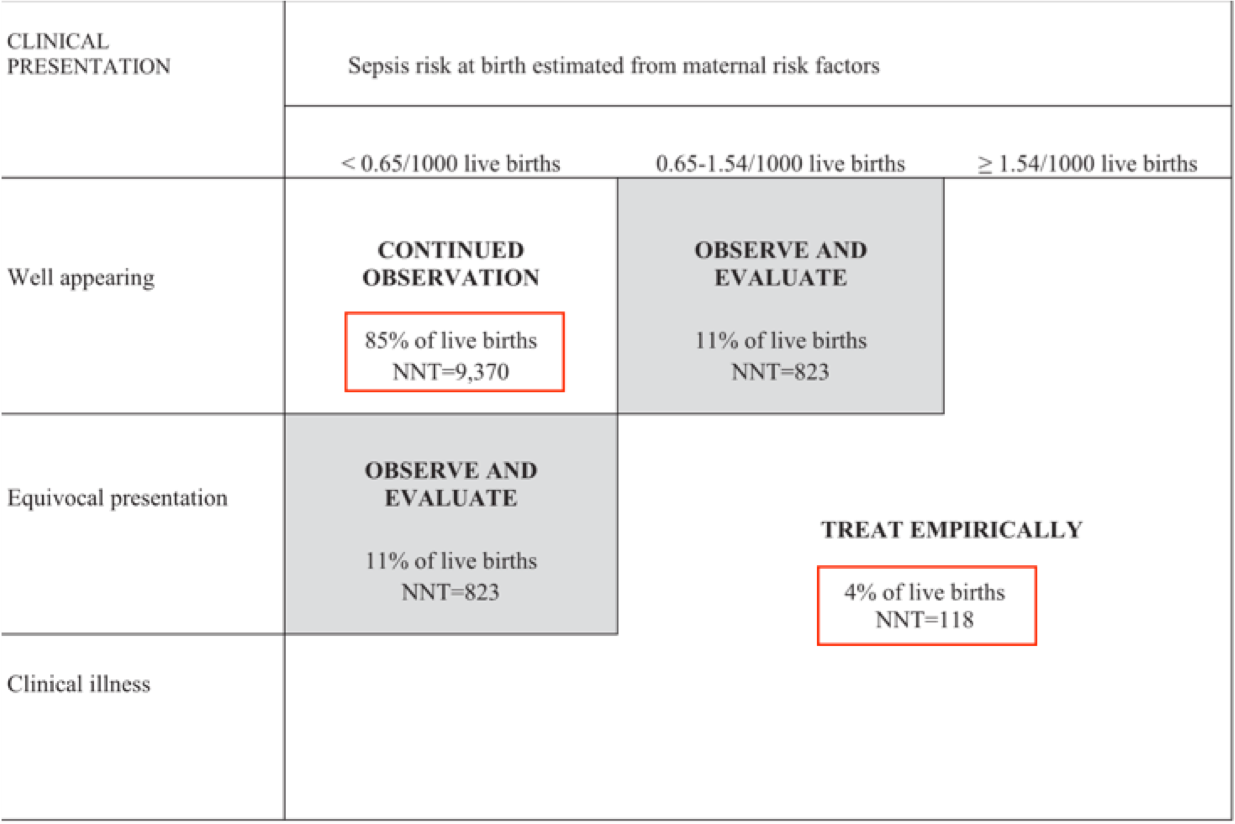 Figure 4. Diagnosis of Chorioamnionitis by the American College of Obstetricians and Gynecologists, 2017 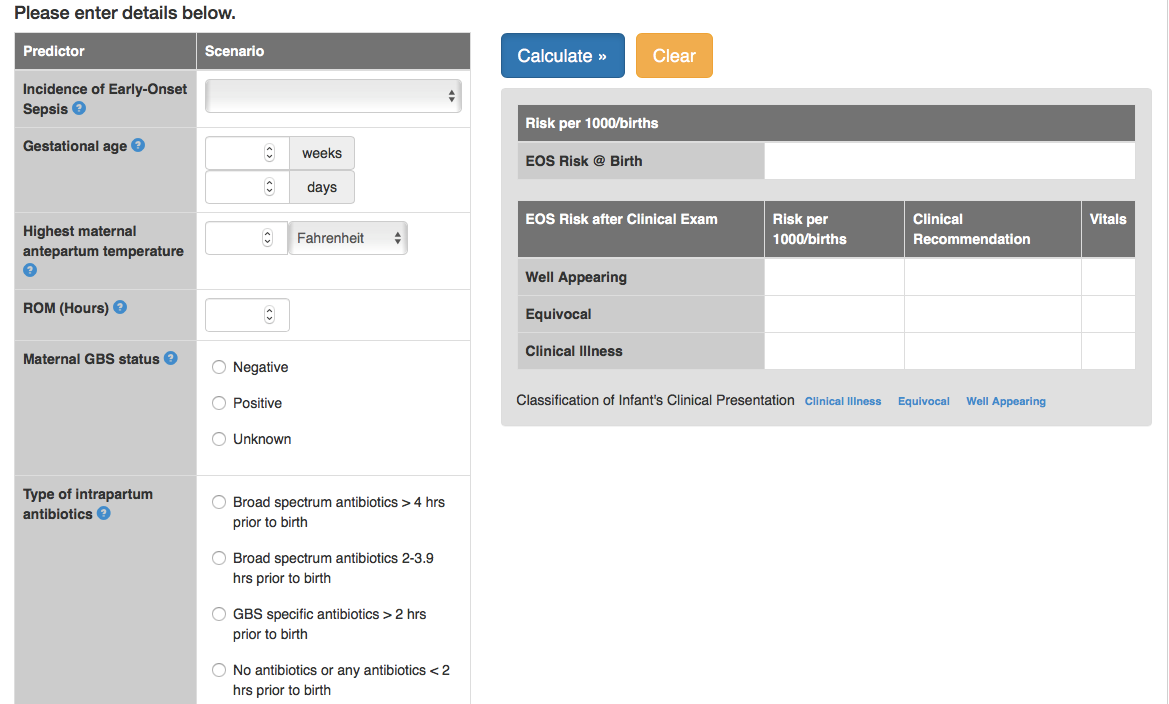 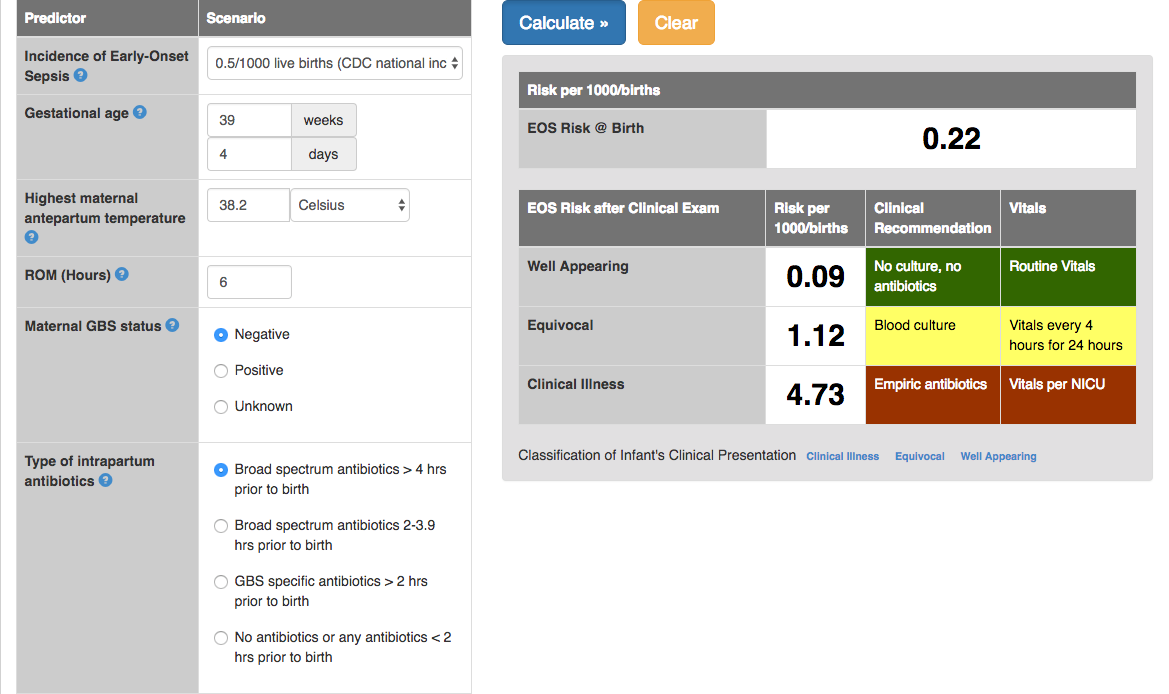