Moral Distress in the NICU 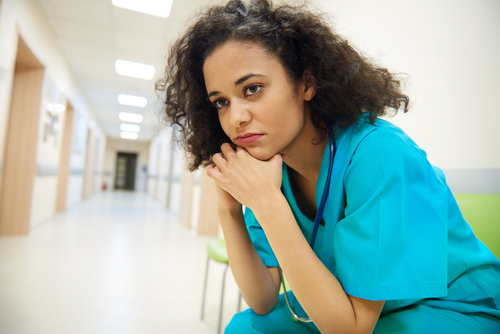 Neonatal nurses give their hearts and souls to each baby and family that they care for. Neonatal nurses are fully aware that along with the triumph and hope for survival, there may also be experiences of profound sadness and morally charged situations. For example, you have cared for the baby with a poor outcome or lethal diagnosis, but the family wants “everything” done, and you speak softly to that little one and hope he or she is not in pain. Or maybe your NICU is short-staffed, or you feel that colleagues are not trained adequately to care for these fragile little lives (Cavaliere, Daly, Dowling, & Montgomery, 2010). Or while you cared for a critically ill term baby, you were also assigned an infant with neonatal abstinence syndrome who was difficult to settle and console.

Neonatal nurses receive advanced training to complement their critical thinking skills while partnering with the technology available in the NICU to provide clinical excellence at the bedside. We understand that the NICU environment itself may cause both physical and psychological stress to nurses (Cricco-Lizza, 2014). Combine the intensity and fragility of life in the NICU, with the scenarios described above, and we become immersed within that gray zone known as “moral distress.”

Andrew Jameton, a philosopher, described and defined moral distress in his published body of work in 1984. Jameton describes moral distress as a “psychological disequilibrium, painful feelings that result from recognizing an ethically appropriate action, but then one fails to take or carry through with that action” (Jameton, 1993, p. 542; Jameton, 1984). Nurses may experience moral distress when they know the ethically correct action to take but feel powerless to take that action. The inability to act may be due to personal or institutional constraints, and in some cases, both are barriers to the nurses’ actions (Allen & Butler, 2016). Neonates represent a vulnerable population; caring for these babies may potentially add a different dimension to NICU nurses’ moral distress (Cavaliere et al., 2010).

The research to date identifies the following clinical circumstances as some of the prevalent causes of moral distress in the NICU:

Moral distress may contribute to feelings of powerlessness, frustration, and dissatisfaction within the workplace, leading to nurses losing their ability to care, avoiding clinical scenarios that have caused them distress, becoming detached from patients, and eventually, suffering burnout. Burnout has led to nurses not only leaving their positions in a healthcare facility but also leaving the nursing profession altogether (Thorne et al, 2018; Fiske, 2018; Allen & Butler, 2016; Cavaliere et al, 2010).

While research has now identified and described moral distress among nurses and other healthcare professionals, one of the gaps noted within the literature is the sporadic exploration of ways to decrease the frequency and intensity of moral distress. In review of the empirical literature, there are strategies utilized to mitigate moral distress; however, more research is warranted. Some of these strategies include development of support networks within care units/healthcare agencies to focus on the interprofessional approach to preserve moral integrity, addressing and eliminating as an institution causes of moral distress that perpetuate distressing barriers of expression and/or patient care, and specifically addressing protocols and formal discussion on end-of-life care issues.

An American Association of Critical-Care Nurses (AACN) position statement released in 2008 identified three levels of stakeholders in which each level is responsible for creating and maintaining healthy work environments. This position statement reflects the importance of maintaining patient safety excellence in patient care outcomes (AACN, 2008; AACN, 2005a).

Preservation of a healthy workplace culture will have a safeguarding effect of retaining nurses at the bedside, improving patient care, fostering therapeutic encounters, and decreasing the cost of health care. Public awareness and commitment from organizational and nursing leadership in developing strategies to identify and treat moral distress will protect the moral integrity of nurses. Furthermore, Renter and colleagues (2014) discovered hospitals with Magnet status were found to have positive work environments, decreased staff turnover, collaborative relationships, and provided support to nurses. Be the voice to care and advocate for our beautiful little patients while nurturing our colleagues to heal their souls during those distressing times.

American Association of Critical-Care Nurses. (2005b). The 4 A’s to rise above moral distress.