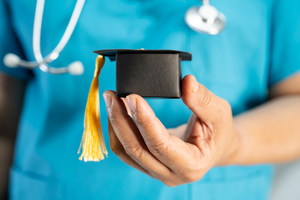 The Neonatal Nurse Practitioner (NNP) role in the neonatal intensive care unit (NICU) is about to mark its 50th birthday.

According to the Accreditation Council for Graduate Medical Education, there has been an estimated 33% reduction in resident physician NICU rotations (Jnah & Robinson, 2015). This will only increase the need for NNPs in NICUs across the country. A 2020 survey reported that the average NNP is 51 years old, and there are 40 accredited NNP programs in the US with new NNPs entering the workforce every year (Snapp et al., 2021). One thing all these NNPs have in common is the journey of navigating the transition that is from the bedside RN role to the head-of-the-bed NNP role. New graduate NNPs have feelings of anxiety, insecurity, exhaustion, and lack of confidence in decision making.

The transition period can be looked at in terms of the first year of starting as a new graduate NNP; that’s because most NNPs report feelings of competence and viewing themselves as a member of the NICU team at the end of year 1 (Cusson & Strange, 2008). To ease this transition, novice NNPs should seek out mentors, be aware of areas of weakness or fears, seek out strategies to ease the transition, and consider the familiarity of the unit. NNPs are an important part of a neonate’s care team, and easing this transition is important for the future of NNPs’ careers.

There are many strengths and weaknesses of being a new graduate NNP, and it is important to be aware of these strengths to gain confidence through the transition process, as well as the weaknesses to know there is room for growth and to feel not alone. These strengths include strong assessment skills, hard-working, professionalism, previous neonatal nursing experience, compassion, calculations, and internal motivation to learn and excel. Perceived weaknesses include procedural experience, pharmacologic knowledge, limited experience, nervousness about role transition, doubting oneself, and emotional attachments to patients and families (Jnah & Robinson, 2015).

One way that novice NNPs can ease the transition to the workforce is through mentorship. There is an ease in the transition from RN to NNP in those who seek out mentors. A study on mentoring and self-efficacy in the NNP workforce revealed that mentorship facilitates positive self-efficacy for the novice NNP (Jnah & Robinson, 2015). Novice NNPs enter this new world with a passion for neonatal care and a desire to make a difference in the lives of neonates and their families; however, the fear of the unknown can be daunting. Mentorship is a collaborative relationship that is beneficial to both the mentor and the mentee by encouraging the development of long-term relationships between novice NNPs and experienced NNPs. During the orientation period, the novice NNP is generally placed under the guidance of a preceptor assigned to provide direct supervision and teach the novice NNP in their new clinical setting (Jnah & Robinson, 2015). A preceptor differs from a mentor in that a preceptor is time-limited; mentorship has no time limitations. Less experienced NNPs report longing for mentorship and support from other NNPs after their orientation is complete (Beal et al., 1997). Mentorship has reported increased job satisfaction, productivity, and quality of care (Jnah & Robinson, 2015). New graduate NNPs who seek out mentors and invest in these relationships can anticipate an ease in the role transition process.

There are a lot of opinions on whether it is a more difficult transition for a new graduate NNP in the facility or unit where they were an RN versus a new unit. An experienced NNP recruiter once described this phenomenon via a metaphor between ketchup and mustard bottles; stating that a novice NNP on the unit where that person was an RN is like a ketchup bottle that has been emptied and filled  with mustard. Even though this person is now filled with different substance (NNP knowledge), others will continue to look at them as ketchup (or their previous role).

However, there is evidence to suggest that RNs returning to their previous unit as an NNP has an easier transition and were benefited by their previous knowledge of the unit. It is also reported that those who accept jobs on units where they completed clinical practicum had a less difficult transition. These NNPs report a sense of familiarity with the hospital, unit, and staff. Challenges in these instances include initially being less accepted by nurses on the unit and, often, being questioned by staff nurses who expect them to prove themselves in their new role. There is evidence to suggest that NNPs who transition to their new role in a completely different unit from training or previous employment are more readily accepted by the staff but face a learning curve with regard to organizational culture and practice styles and routines (Cusson & Strange, 2008).

Strategies to enhance the role transition include developing good relationships with all staff, finding a mentor, becoming an active member of a professional nursing organization, sharing needs and accepting guidance, developing strategies to decrease stress, staying up-to-date in current evidence, and realizing that feelings of inadequacy are normal and will dissipate throughout the transition. Although each person develops in their identity of their new role, overall being open to support and guidance and being an active part of your new role as an NNP can increase confidence in the development of a role identity. A strong nursing identity is vital because it is associated with a successful NNP practice (Cusson & Viggiano, 2002).

The NNP is an important part of the neonatal care team. The average age of an NNP is decreasing as the NNP workload in the NICU is increasing across the country. New graduate NNPs will continue to transition in the role from bedside to head-of-the-bed, and can find support in this transition through mentors, self-evaluation, and careful examination of areas of strength and weakness. This transition period is just that, a transition, and there are ups and downs throughout this process. It is important to recognize that the progression of graduating from school, seeking employment, studying and obtaining licensure, and credentialling does not happen overnight. There are a lot of feelings of anxiety and worry, because it seems as if we have little control over the timeframe or outcome.

As the NNP progresses through orientation, and even in the first months of being “on their own,” they may feel anxious and inadequate and experience self-doubt, manifested primarily through questioning their knowledge and skills, wondering if they can handle a crisis or worse, and fearing making a fatal mistake or missing an important diagnoses (Cusson & Strange, 2008). As new graduate NNPs enter the workforce, it is important to provide support them throughout this process.