It is well documented that infants who are hypothermic upon admission to the neonatal intensive care unit (NICU) have an increased risk of mortality and morbidities such as late-onset sepsis, intraventricular hemorrhage, and oxygen dependency. After evaluating our unit’s admission temperatures from the Pediatrix Clinical Data Warehouse (Figure 1) we found that only 50% of our very low birth weight (VLBW) (< 1,500 g) infants were being admitted with normothermic (97.7 °F–99.5 °F) temperatures. The following is an overview of how our team successfully increased normothermia in this vulnerable population. Our unit is located in a large urban hospital that is a tertiary referral center for high-risk maternal care and serves 18 surrounding counties. The facility delivers more than 3,500 babies annually, 15% of which are admitted to the 63-bed level III NICU. 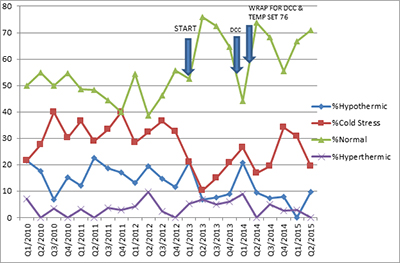 Of these interventions, our hospital had previously implemented all but warming the delivery room to 74 °F–76 °F. The NICU team knew this would be the toughest intervention to accomplish because of resistance from L&D staff and the delivering physicians. Therefore, our NICU medical director teamed up with a perinatologist to address barriers and potential harmful outcomes to this vulnerable population. After much discussion, the NICU medical director presented the data, which included mortality and morbidity outcomes, to the Obstetrical Division, which then agreed to implement the much-needed change. Cooling vests (Figure 2) were made available to all physicians and staff to manage the discomfort associated with warmer delivery rooms.

The H.E.A.T. (Hypothermia Eradication from Admission Temperature) team developed a tracking tool to document compliance with the intervention bundle. We tracked the delivery room temperature, use of all appropriate heating products, room number, high-risk team, use of briefings and debriefings, and admission temperature upon NICU arrival for each VLBW infant born during the 2 years after implementation. If an infant was admitted with a less-than-optimal temperature, the nurse educator debriefed either the neonatologist or the high-risk delivery nurse present at the delivery to identify potential modifiable reasons for suboptimal admission temperatures. When improvement opportunities were identified, the nurse educator communicated these to the neonatologists and high-risk delivery nurses.

We prospectively collected data on 430 VLBW infants born during the 2 years after implementation of the intervention bundle. During that period, the rate of hypothermia in infants upon NICU admission decreased from 20% to 10% and the rate of normothermia in infants increased from 50% to 70%. A hospital policy was created summarizing the bundle of interventions used. This policy is now a part of required orientation for L&D staff and high-risk NICU delivery nurses. We also have designated one L&D operating room to stay warmed at 76 °F for NICU deliveries.

During this 2-year quality improvement project, we achieved and sustained multidisciplinary support from staff. Practitioners took ownership of different aspects of the interventions. This multidisciplinary cooperation and communication was an extremely gratifying and unanticipated benefit of this project.