Emergency Preparedness in the NICU 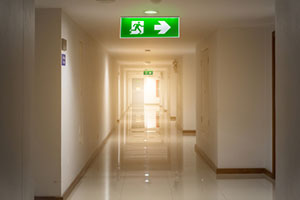 Many bedside nurses in the neonatal intensive care unit (NICU) start every shift the same way: get a report on their patients from the off-going shift and promptly complete a safety checklist. The checklist includes everything from confirming vent settings and tracing intravenous (IV) lines, to verifying alarm limits and checking suction. A safety checklist is imperative to verify emergency equipment is functioning properly and easily accessible to prevent environmental or external barriers to providing safe care to these unique patients. For new nurses this process may take longer to complete, but it eventually will become routine and second nature. For most nurses this provides a sense of confidence and assurance that they are fully prepared for a safe shift in the NICU.

For those who move into positions of leadership, greater safety concerns, including the overall safety of the staff, patients, and the unit, take precedence. These leadership roles require a different, more comprehensive safety checklist. In 2018, American Family Children’s Hospital (AFCH) in Madison, WI experienced a 9-minute power outage and generator failure affecting the 26-bed level IV NICU. The safeguards that were put in place provided minimal assistance. Fortunately, the quick-thinking team jumped into action to ensure each patient was safe and stable, and ultimately power was quickly restored without any patient showing signs of distress from the brief disruption in care.

This experience was just one incident in 2018 that highlighted the need for a NICU-specific emergency plan; other incidents included a tornado warning, historic flooding, a pediatric mass casualty bus accident, and an active shooter in the adjacent town. These events highlighted the need to consider safety in the NICU extending beyond the walls of the actual unit. It forced unit leaders to consider how to provide care to the tiniest patients while swiftly moving them to a separate location.

In a disaster, NICU patients are extremely vulnerable because of their dependence on technology for basic needs such as warmth, nutrition, and oxygen as well as the potential for disruption to their protective surroundings (Barfield & Krug, 2017). Prior to 2018, emergency plans for the NICU at AFCH were hospital-wide, encompassing both AFCH  and UW Hospital. There were no inpatient unit-specific plans. The solution was to create a NICU-specific emergency guide that covered infrastructure failure, horizontal and vertical evacuation, and active shooter.

The initial step in developing the unit specific emergency plan was to adapt the existing guide from the level III NICU that we have a Joint operating agreement with and share providers with. A draft was presented to and reviewed by members of the AFCH NICU Unit Council. Throughout this process the nurse manager met with the hospital safety officer and the security director. In addition, the nurse manager toured the AFCH and UW Hospital pre/post anesthesia care unit areas to establish agreements for them to serve as the staging area for the NICU in the event of a vertical evacuation.

Emergency supplies and equipment were purchased. Based on personnel feedback from the night of the power failure, lack of light to assess patients was a major issue; thus, lanterns were purchased for each patient room. Prior to the new emergency plan, the only evacuation equipment present in the unit were a couple of evacuation sleds. Although these were suitable for the full-term, healthier patients, further consideration and review of our average acuity highlighted the need for equipment that could accommodate the more critical patients. Subsequently, the unit purchased an evacuation sled, basket, and rack system. Once these items were ordered, the focus shifted to the logistics of an emergent move from the NICU. Go bags containing critical supplies the bedside nurse would need to quickly and safely evacuate each patient were prepared. Two large bags (referred to as care team leader (CTL) go bags) were stocked with NICU-specific supplies that cannot be found in other departments; these bags serve as portable supply closets in the staging areas. All emergency supplies are stored on the south side of the unit in a large, accessible cabinet; the go bags are checked monthly to ensure compliance and no expired supplies. The bigger evacuation equipment is stored in the south side equipment room.

In addition to the CTL go bags, the team developed role cards to hand out to staff during an evacuation, outlining necessary tasks. Seven roles were identified and assigned tasks; these were made into laminated cards to hang from a badge holder and serve as a step-by-step guide. The role cards are stored with the CTL go bags. In the event of an evacuation, the go bags are retrieved and passed out; role cards are given to bedside nurses as well as respiratory therapists, physicians, etc.. The first CTL go bag will go with the first person to leave the unit for the staging area, and the other CTL go bag will go with the last person to leave the unit. In the event of an active shooter, the emergency guide outlines the hospital-wide policy for responding to this crisis. In addition, the team identified every space in the NICU that has a door with a deadbolt.

The NICU emergency guide was presented to the NICU staff during NICU education days, which are held annually in January and February. The guide is easily accessed on the online workspace and there are hard copies available in the CTL binders. During the annual education staff is taught that in an emergency situation, remaining calm, open-minded, and improvising also are useful concepts in providing care to this vulnerable population (Barkemeyer, 2006). Future plans include incorporating emergency preparedness into the NICU orientation curriculum in addition to the annual education.

The most recent installation of the project is familiarizing the staff with the evacuation equipment. Brief education sessions during work hours allow for hands-on experience with the sleds and the sled evacuation basket and rack systems. Future goals for the AFCH NICU include having a mock vertical evacuation drill, investigating resources for an external evacuation, and disseminating the guide to other inpatient units to assist in the development of their own emergency response plans.

It is important to note that the guide is not a policy; it is meant to be a reference document. Being prepared does not equate to perfect execution, but by having a plan in place, it is the hope that the NICU staff will be better equipped to extend the care of these patients beyond the walls of the NICU in the event of an emergency.

Barkemeyer, B. M. (2006). Practicing neonatology in a blackout: The University Hospital NICU in the midst of Hurricane Katrina: caring for children without power or water. Pediatrics, 117(5 Pt 3), S369-S374. http://pediatrics.aappublications.org/content/117/Supplement_4/S39.