It Hurts, But We Need to Talk About It 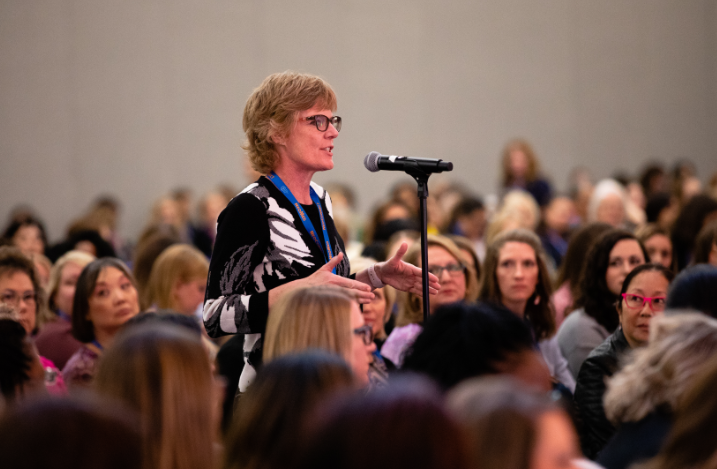 I would be dishonest if I were to say that writing comes to me easily. I have done a lot of it in my life; however, I typically am provided with a topic and then I write. NANNP Corner gives me the opportunity to determine the topic….and then write. For me, there is a degree of responsibility that comes with that opportunity, and on more than one occasion I have submitted an article and then at the last nanosecond submitted a second one on a different topic. This is one of those months.

I had the great fortune to attend the American Nurses Association’s (ANA) membership assembly this year. For those of you who may not be aware, it is during the membership assembly that the elections for the ANA board positions, nominations committee, and elections committee occur. However, another important part of the membership assembly is the dialogue forum. During this forum, nurses are called to take action on pressing topics we encounter on the job. This year one of the topics was human trafficking. Last year the membership assembly discussed the separation of immigrant children from their families. It is difficult to describe how powerful it is to engage in and listen with one’s peers about emotionally charged and sometimes politically hot topics such as these. But I can say that it is extraordinarily emboldening to be among nurses in a professional organization when they reach consensus and decide to use their power to make a stand.

I imagine that there are few people in the United States who have not heard or read about the current situation in the children migrant detention centers along the U.S./Mexico border. Everyday there are new reports about the horrendous conditions found in the detention centers in which minors are being held, many of whom have been separated from their families. In a recent PBS News Hour interview, Warren Binsford, an attorney who visited a detention center in Clint, Texas, described what she saw:

“Basically, what we saw are dirty children who are malnourished, who are being severely neglected. They are in inhumane conditions….We have children caring for other young children. We’re seeing a flu outbreak, and we’re also seeing a lice infestation. We have children sleeping on the floor. It’s the worst conditions I have ever witnessed in several years of doing these inspections” (Brangham & Binford, 2019).

Another attorney, Elora Mukherjee, the director of the Immigrants’ Rights Clinic at Columbia Law School, also visited the detention center in Clint. She and others spent time with 60 children. Their ages ranged from 5 months to 17 years old. Most of these children were separated from their parents, unless their parent was 17 or younger (Dickerson, 2019). “The children are locked in their cells and cages all day long,” according to Ms. Mukherjee (Dickerson, 2019). Ms. Mukherjee also stated that she too had never seen conditions as bad as they are currently at the detention center in Clint.

In 2008, President George W. Bush signed the Trafficking Victims Protection Reauthorization Act. This law disallowed the Customs and Border Patrol (CBP) from holding minor children in detention centers for more than 72 hours. Yet, recent reports have shared that there are children who have been in the detention centers for weeks (Herrera, 2019).

Several professional healthcare organizations have made pleas for the family separation policy to end. On June 11, 2018, the National Association of Pediatric Nurse Practitioners (NAPNAP) published a statement opposing the separation of children from their parents (National Association of Pediatric Nurse Practitioners [NAPNAP], 2018). Then, on June 19, 2018, a joint letter from the Nursing Community Coalition, which includes NAPNAP, NANN, and NANNP, along with many other professional nursing organizations, was submitted to the U.S. Secretary of Homeland Security requesting that action be taken immediately to protect migrant children and to reverse the policy that allowed children to be separated from their families (NAPNAP, 2018). In June of 2018, after the ANA membership assembly, ANA published a statement urging the administration to end the forced separation of families (ANA, 2018). In February of 2019, Julie M. Linton, a physician, testified before a House of Representatives committee on behalf of the American Academy of Pediatrics (AAP) (Linton, 2019). She stated that the AAP opposed any policy that would separate children from their families. Linton also shared with the committee the long-term health and emotional implications for families and children if they are forcefully separated. On May 29, 2019, NAPNAP issued another statement calling for immediate investigation of the conditions in the detention centers (NAPNAP, 2019).

In spite of the urging from healthcare professionals, recent reports would indicate that the detention centers have failed to meet the standards set by the Flores Agreement. Furthermore, the Trafficking Victims Protection Reauthorization Act has been violated since minors have been held in CBP detention centers longer than 72 hours. Due to the current influx of immigrants, the situation will likely worsen.

As nurses, our professional code of ethics requires us to “always act to preserve the human rights of vulnerable populations” (ANA, 2018). We are the most trusted profession in the United States and we need to use that trust and continue to demand that immigrant children are not subjected to the inhumane treatment that is currently being described in the news. This can be done through posting on social media, sending letters to legislators, donating to organizations that provide legal counsel for immigrants and refugees, and supporting organizations that provide services for immigrant families. It is important that the voice of nurses is heard. I keep thinking back to the dialogue forum as all of those nurses spoke and reached a consensus to support vulnerable populations and I remember how powerful that was. As one speaker said, “If not nurses, who? And if not now, when?”

Dickerson, C. (2019). ’There is a stench': Soiled clothes and no baths for migrant children at a Texas center. The New York Times. Retrieved from https://www.nytimes.com/2019/06/21/us/migrant-children-border-soap.html