The Neuroprotection of Oral Enjoyment by Giving Milk Drops

Approximately 80% of premature infants will have difficulties with oral feeding, making this the leading developmental issue in the NICU (Hardy et al., 2018; Shaker, 2017). Early in the second trimester, the fetus tastes and swallows the amniotic fluid and smells its familiar scent. They touch and suck their fingers. These repetitive pleasurable oral experiences stimulate the development of neural pathways that associate eating with oral enjoyment. This is especially critical for the VLBW infant, as the structural differentiation of the brain is also occurring rapidly between 23 and 32 weeks (Perry et al., 1995; Pickler et al., 2010).

When infants are born prematurely, they abruptly lose the neuroprotective environment of the womb. These infants immediately experience the oral invasion of their mouth with suctioning, bagging, and often intubation. Necessary medical procedures and routine NICU care may have a negative impact on the oral sensory and oral motor function of the premature infant (Shaker, 2017). Due to their immaturity, premature infants are not offered oral feeding attempts until they are 32–34 weeks corrected gestational age (CGA) (Rodriguez et al., 2010; Kirk et al., 2007). Therefore, premature infants born at 23 weeks will experience nine to eleven weeks of noxious stimuli and little oral enjoyment during the most critical time of neurodevelopment. The transition from gavage feedings is often challenging, with many infants staying longer in the NICU to achieve oral feeding competence (Simpson et al., 2002; Pickler et al., 2010).

In 2015, Blank Children’s Hospital, a Level III NICU, launched an approved IRB research project of giving milk drops to premature infants. The project was initiated due to an increase of oral aversion in VLBW and low-birth-weight (LBW) infants and their inability to take full oral feedings at 40–44 weeks CGA. A literature search provided evidence that giving droplets of own mother’s milk to the tiniest and most fragile of infants was safe and offered the premature infant a level of immunity (Rodriguez et al., 2010; Montgomery et al., 2010). The guidance of the NICU medical team was sought, and their request was that the project focus on infants born between 23 and 33+6 weeks gestation. Although the only hypothesis was that “the infants who received milk drops would have a shorter length of stay (LOS) than infants who did not receive milk drops,” additional data, including heart rate, respiratory rate, oxygenation, color, state, tone, and respiratory support, helped the data collectors assess the infants’ physiological response to the milk drops.

The milk drop intervention would start on the 3rd day of life (DOL). The infant was given routine cares and nested. The only thing left was for the infant to enjoy drops of milk. Using a 1-ml syringe, a drop or two of milk was placed on the infant’s lips. If the infant licked their lips, a swab or pacifier would be “offered” by gently stroking the infant’s lips. If the infant “accepted” by opening their mouth, the swab or pacifier would be placed and more milk given, a drop at a time, based on the infant’s cues. The swab or pacifier remained in place as more drops were given. The volume of milk drops was limited by gestational age, and just like feeding, sometimes the infant would not respond. However, most of the time, the infant did respond. As the infants matured, they would often awaken before cares, sucking their fingers, looking around, and “waiting” for their milk drops. The intervention would often take 10–15 minutes to complete as the nurse paced the infant, allowing the infant to guide the process. Milk drops were only given with cares or gavage feedings. If the infant was offered an oral attempt of nursing or bottling, it was considered the oral enjoyment for that set of cares.

One hundred preterm subject infants were matched with 100 control infants who were discharged from the NICU before the study began. One infant (a 23 week) was excluded from the study analysis since this infant had been transferred to another facility before discharge. The remaining 99 infants were matched by gender and gestational age at birth with control infants. The average LOS for the subject group was 44.11 days versus the control group’s 49.30 days. The most significant difference in LOS was seen in the infants 24–30 weeks. When costs were assessed, the NICU saved over $660,000 on these 99 infants (see Table 2). 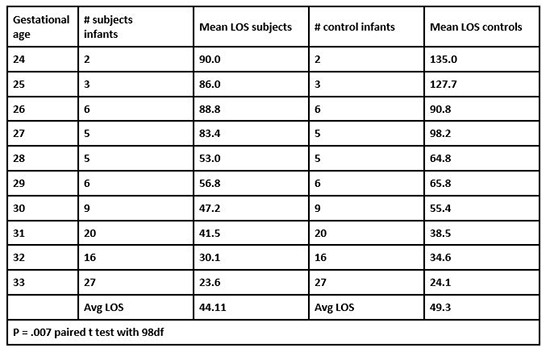 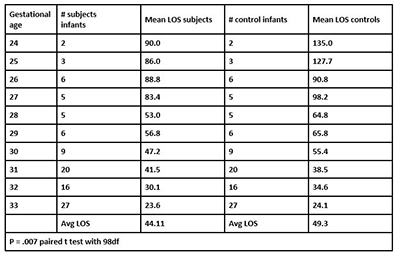 The medical team felt so strongly about the importance of this intervention that milk drops became a standard of care for all infants in the NICU. Nurses now document the infant’s response to milk drops in the electronic medical record. The therapists and medical team often include the infant’s response to milk drops when they are assessing for oral feeding readiness. It is not unusual for our VLBW and LBW infants to go home at 36–37 weeks, some exclusively breastfeeding.

Highlighted below is one of the infants who recently received milk drops as a micro-preemie. Born at 23 weeks, the infant was eventually transferred to a Level IV NICU at 35 weeks. This little one had received milk drops per standard of care since DOL 3, and the mother requested the Level IV hospital to continue milk drops. The infant remained on high-level support for an additional 17 weeks (52 weeks CGA). When she was finally allowed to bottle, the nurses were amazed. The mother has given permission to include her progression. 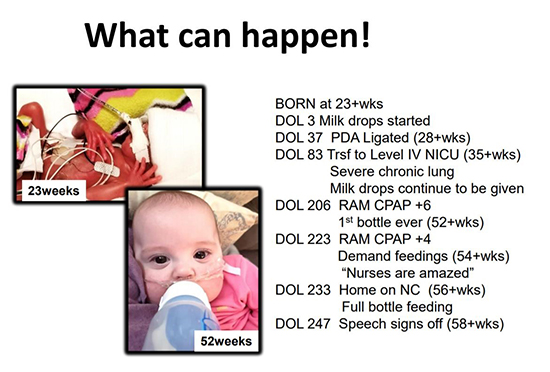 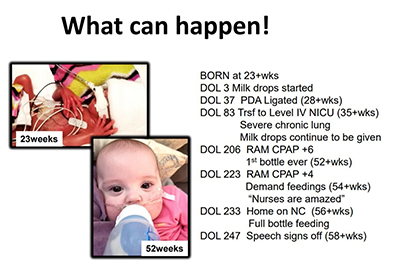 Giving droplets of milk with cares and gavage feedings is a simple, no-expense intervention that has truly made a difference in helping our micro-preemies and parents become more successful with feeding. The true joy for both the medical staff and families is to watch these tiny infants enjoy breastfeeding and bottling the very first time they are able to orally attempt.