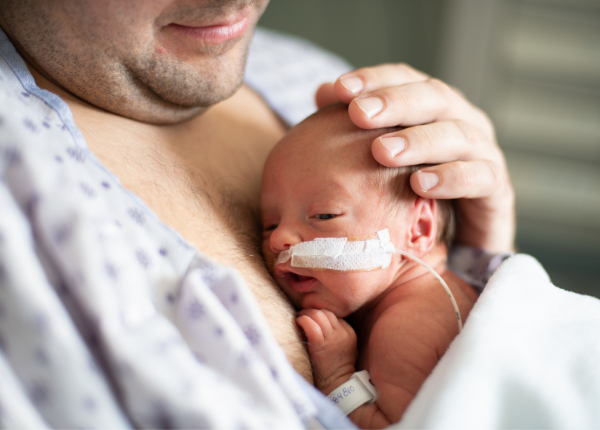 As a new nurse, I feared the day a patient of mine would die. It was a fear I had every day I walked into work, awaiting my assignment. It was scary to me and not something I had gone through as a student nurse or during my orientation. One day, I was given a critical 1:1 assignment. As I was receiving hand off, it became clear that this baby, that suffered hypoxic ischemic encephalopathy, was not going to make it. As soon as we were done going over the medical-related items such as medications, drips, lines, and ventilator settings, my first question was, "Have the parents held him?" I was immediately told, "No he is being cooled, he's ventilated, he's got an umbilical arterial line. He's too sick to worry about that." The next shift after re-warming occurred, I asked the medical team if the parents could hold him. When I approached the parents with the idea of holding their baby, they wanted to but appeared so apprehensive. With the help of an experienced nurse, we got this baby into both mom and dad's arms. Unfortunately, they were so scared, and we put him back into the radiant warmer after 10 minutes.

On the last shift of my stretch, we withdrew care. The parents didn't want photographs, they had the one I took from when they held their baby. They didn't want to help with the bath and they didn't want to stay once he passed. The parents held their baby for the last time as he passed. As they handed me their baby, I ached for all the memories that the family would not have. No first birthday, no holidays, no milestones, no experiences but that hospital and the short time in their arms. I was heartbroken to think that this family would go back to their house with an empty nursery. I lost my mom to cancer in that very hospital a few floors above and knew the feeling of leaving a part of yourself there that you would never get back. I was shocked they didn't want every bit of memory they could have of their son. The thought of parents not holding their baby enough times haunted me. After some time, I realized maybe we as health care providers created that distance and influenced this detachment by not letting them be more involved in care.

As I attended a neonatal developmental conference, I saw a class on the parent experience during therapeutic hypothermia and knew I wanted to attend. The class was enlightening but the stories were devastating. One hospital discussed how they let parents hold. They stated they had no adverse effects. When I returned home, I immediately started to look up evidence-based articles on the subject. There were none. No research studies, no data on holding while undergoing therapeutic hypothermia. Even though therapeutic hypothermia is a newer technology, I thought there would have been more research but realized there was a gap in knowledge.

I knew it was a situation that needed to change in our unit. I reached out to the medical director to see how he would feel about implementing this protocol. I came prepared for our meeting with an entire binder full of data about the power of holding, prepared to defend my case. When I met with him, he encouraged the idea full-heartedly. I was slightly surprised by this, as encouraging my own peers to let parents hold was like asking the world of them.

Since there was no data that I could find, I decided to begin a research study on this topic so that other hospitals could implement this protocol too and for those that did meet resistance as I had among my peers, there was data available. Evidence-based practice is imperative and is critical to initiating change. I reached out to the nursing research team at my hospital and they were immediately supportive of taking this task on. Since I had no knowledge of how to write a study protocol, they took that task on as I gathered information for the background and tools for the study. We designed a mixed-methods study with a qualitative interview to go along with a questionnaire about their stress levels before and after holding.

This experience from my patient assignment to research study development has shaped my entire career. I decided to go back to school to obtain my PhD so that I can continue to do research and make a difference for more than just that patient I took care of at the bedside that day. I think about that family and the many others I have taken care of often. When school gets stressful and the motivation is hard to find, I think of these families. I think of the sound of the cries that will live with me forever, handing mothers their babies for the last time, and I remember why I chose this path. I will continue to fight for better outcomes for moms and their babies, so no mom has to hold her newborn for the last time.