With excerpts from “The Knowin Owen Blog”
Tyler and Michael Daugherty

Over the years, I have met many families and have shared with them both joy and pain. Every baby deserves to have his/her story told but this story is about a special little boy who has surpassed expectations of his physicians and sometimes his nurses, but never his parents. They always maintained the faith that he would receive the care that he needed and that they would make sure he had the very best life they could offer to him.

April 28, 2010: This was the day Tyler and Michael went in for their 20-week anatomy scan ultrasound. They had a quick ultrasound at 17 weeks to determine the sex of the baby and knew they were having a little boy. They were like most parents, overjoyed to see their baby, but during the scan the ultrasound tech became concerned about what she had seen and left the room to find the doctor. He was diagnosed with posterior urethral valves. Michael said it best when he wrote “Finding out with Tyler that something was wrong with our unborn baby, I knew this would be a day we would look back on for the rest of our lives. For better or for worse, our lives were going to be changed.”

Owen came into this world August 7, 2010 at 11:40 pm at 34 weeks gestation, weighing in at 5 pounds 14 ounces. He was intubated at delivery and required a chest tube due to a pneumothorax. Fortunately, he was able to be extubated within 24 hours and the chest tube was removed. Her thoughts the first time Tyler saw her baby boy: “Owen hadn’t opened his eyes yet, but when I was rolled to his bedside and whispered his name, he peeked out with one little eye. Let me say, that was the most beautiful eye I have ever seen! Being able to put into words exactly how that moment felt is impossible. It’s almost as if the world around me completely stopped, it was just the two of us.”

Owen was transferred to Cincinnati Children’s Hospital Medical Center on day two of life. This is when I met Owen for the first time. Honestly, I had never taken care of a baby with this diagnosis. My experience had been to stabilize and then transport them to a referral center. Owen and I had a lot to learn together. He had to endure multiple surgeries during the first week of his life. Nephrostomy tubes were placed to drain the urine and he also had a peritoneal dialysis (PD) catheter placed so that he could receive dialysis. He was on and off the ventilator with each surgery. “At one point, Owen had 8 tubes sticking out of him! (2 nephrostomy tubes, PD catheter, Foley/urethral catheter, IV-line, PIC line, Intubation tube, NG tube).” (Dad, Michael)

Early on it was determined that at some point Owen would require a kidney transplant. He was started on PD dialysis within the first week of life. Dialysis for newborns is always a challenge as I quickly learned. The PD catheter can be temperamental at best. The skin around it needs to heal before it can be used. We had to start and stop Owen’s dialysis four times before we could get it to work effectively for him. His parents were by his side and did everything within their power to learn more about the care he would need and participated in taking care of him as they looked forward to the day, they would get to take him home.

The NICU environment is a harsh reality for so many patients and families. It’s the little things that can make such a huge difference for a family and can bring such a huge smile to their faces. “As Owen is growing stronger and developing, I am able to experience so many joyful moments with my son. One of them being the first time Owen took a pacifier. Most moms would write this off as any normal baby behavior. With Owen’s kidney failure, doctors had forewarned us that he would likely not develop a sucking ability and likely never feed from a bottle or breastfeed. The moment Owen took his paci, I can’t even explain the joy that was rushing though my body. Tears, of course, followed like rain down my face, as I watched my sweet boy suck away!” (Mom, Tyler)

Owen remained in the NICU for exactly 100 days. He underwent three additional surgical procedures prior to discharge: valve ablation, bilateral orchiopexy, and bilateral inguinal canal closure. As his dialysis was transitioned from intermittent to the cycler, his family learned how to care for him so that they could provide the needed dialysis at home. He required every six-hour intermittent urethral catheterization to empty his bladder. Because he could not take all of his feedings by mouth, he went home on nasogastric feedings. As I reflect on the amount of care this baby required at discharge, I think about the families that take these babies home. They have to learn so many aspects of care that it can be quite overwhelming and they have to do it without the medical knowledge that so many of us have.

He was discharged home on November 15, 2010 and in typical fashion his mother wrote the following: “We are just so blessed by our sweet boy. Nothing can bring tears to your eyes faster than hearing his sweet voice and watching him smile. He is nothing short of a miracle and we are daily praising God for this gift. I can remember every minute of our first night at home-most likely because I didn’t sleep a wink. I was so in awe of the miracle sleeping before my eyes, in his own bed, in our house. Together, as a family, finally. Owen’s story isn’t over. Our road is still long but we can praise God in knowing that he is paving the way before us”.

Owen’s story did not end there and it is not over yet. He underwent additional surgeries over the first few months after discharge (bladder repair and gastrostomy tube placement). He suffered complications of anesthesia delaying scheduled surgery and ultimately required a kidney transplant. 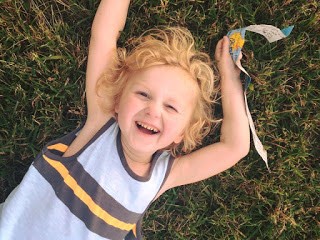 On April 3, 2012, Owen received the best gift he could ever ask for when his aunt selflessly gave him one of her kidneys. After the transplant he excelled on all levels. Tyler’s tribute to her sister-in-law: “Because of her, my baby became a bouncing, busy, crazy toddler in what seems like overnight. Because of her, I can now order from the kids’ menu for a hungry boy, who has learned to eat by mouth. A simple act I had so longed for :) because of her, my house is an absolute wreck. And I absolutely love it. Because of her, I rarely sit down, due to chasing a very busy boy throughout the house. Because of her, I can sing, I can dance, I can pray, and I can play with a boy who loves every minute of every day. Because of Carrie, Owen lives.”

Owen is now 8 years old and has two younger brothers, Abel who is four, Ezra who is two and he is getting another handsome brother, Ivan, this April. He has had many challenges and a recent diagnosis of autism but he loves life, loves his family, loves school and has done more and impacted more people in his short life than many will do in a lifetime. He has left an impact on me that will never leave. This family is amazing and this little boy is indeed a miracle.

Final words from Tyler: Our time of suffering has been blessed by hearing from others how they have seen God through Owen’s story. This is our hope and goal that through this, you don’t see us, but you see the glory of the Lord shining through Owen’s story. God is good among all, and though Owen would never deserve anything like this, the Lord reigns above us and Owen is preaching the Lords’ mighty power and HE will be praised through this time.