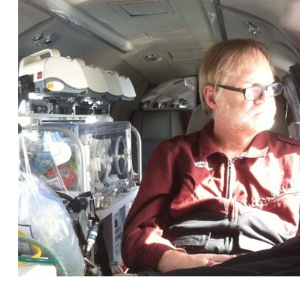 As nurses in the NICU, we face challenges, celebrate miracles and milestones, but most of all we dedicate our knowledge and expertise to our tiniest patients each and every day. NICU nurses have many roles, such as educators, advocates, supporters, and collaborators. In addition to evidence-based research and best practices, we rely on the knowledge and expertise from co-workers, respiratory therapists, occupational therapists, pharmacists, and neonatologists to ensure that the best optimal outcomes are achieved.

Although there are many characteristics that make up a neonatal nurse, commitment, compassion, and integrity are perhaps some of the most important. Ron Olsen defines our core values as a neonatal nurse. He has developed extraordinary expertise and demonstrates an abundance of knowledge that exemplifies being a neonatal nurse. Ron has been described by co-workers as "my go-to, calm under pressure, humble, and hands down, being Zen". Dr. Lawrence, Neonatologist who has worked alongside Ron for the past 30 years, stated, "He has a gift for bedside neonatal intensive care and is able to provide great and consistent care in the most urgent circumstances, while maintaining a calm demeanor that reassures parents and colleagues. It has been my honor to work alongside Ron all these years."

Ron started his nursing career when he graduated from St Luke's School of Nursing, Sioux City, Iowa in the 1970's. Over the years he has become the "guru" of neonatal nursing, providing a guiding influence because he has "been there and done that" in everything from bedside nursing to management. He has made a tremendous impact in neonatal nursing since St. Alphonsus Regional Medical Center in Boise, ID opened their 6-bed, level 3 NICU in 2000 and has been instrumental in the unit's growth to a 32-bed unit. With his 30+ years of experience, Ron is an instructor for STABLE, a transport nurse, helps coordinate staff simulation education, and is a member of the PICC line team for the unit. Ron identifies with families and the concerns their concerns. Through his calm demeanor and sincere empathy, he educates our families and puts worries and fears at ease. In addition to many of his nursing qualities, Ron has a passion for the outdoors, photography, Japanese sumo wrestling, and cold weather.

Ron is well respected within the community, he volunteers his time by taking photos of our NICU graduates and their families every year for the harvest party (an event held every year for past NICU graduates since 2000), the Festival of Trees, Ski and Mountain Trauma conference, and NICU sponsored events. Ron is an influential figure in neonatal nursing and such an asset to St Alphonsus and the Treasure Valley community. Our unit wouldn't be what it is today without his expertise, knowledge, and dedication.